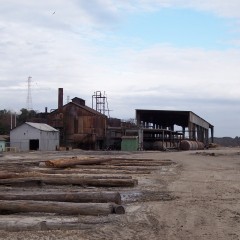 Carlson was contracted to provide environmental due diligence support relating to the purchase and redevelopment of this 50-acre former wood treating site located near Savanna, Georgia.  Historically the facility treated wood utility poles and railroad crossties, initially with creosote and later with pentachlorophenol.  When the facility was initially developed, these chemicals were not regulated, and thus, were not managed with sufficient care, leading to the release of substantial quantities to the subsurface soil and groundwater.

As a result of releases that had occurred over the years, a dense, non-aqueous phase liquid (DNAPL) pool, primarily creosote and pentachlorophenol, had accumulated approximately 30 feet below grade over a significant portion of the site.  Groundwater had also been impacted as a result of the gradual dissolution of this DNAPL.

Carlson and our Client entered into extensive negotiations with the Georgia Department of Environmental Protection to evaluate site remediation alternatives that would be conducive to site redevelopment.  Although the site was already undergoing RCRA Corrective Action, Carlson determined redevelopment of the site would have required significant additional remediation including decontamination during demolition, installation of more than 4,000 feet of slurry wall on-site as well as the installation of additional slurry wall on an adjoining property, excavation and disposal of impacted soil which would be listed hazardous waste, as well as possible dredging of a portion of the Savannah River, and continued groundwater treatment for decades.  Ultimately our Client ceased negotiations on the property, choosing to pursue other prospects which were more economically attractive.

“Carlson knows its stuff and has vast experience in the real world. I can rely on Carlson’s counsel to not only understand technical issues, but also to formulate litigation strategy and offer business advice to my clients.”

"I have had the pleasure to work with Carlson Environmental on numerous environmental projects over the past 20 plus years. During that time, Carlson has always provided professional guidance, oversight and reporting no matter the size of the project. We look forward to a continued successful relationship."

“Carlson Environmental is my trusted source for environmental consulting. Whether it’s a Phase I / II or more complicated consulting, Carlson has repeatedly delivered comprehensive solutions for complicated issues. They have become an integral part of our acquisition and due diligence processes.“

“In Banking, far too often our focus on the environmental component of a real estate relationship occurs only when there is a problem. Fortunately we have an established relationship with Carlson Environmental. Ed Garske and his entire staff are professional, responsive, knowledgeable and fair. And most important, they...

“CenterPoint and Carlson formed a partnership that has lasted over 20 years. They understand CenterPoint’s risk tolerance and have successfully assisted us in assessing, mitigating and monitoring environmental risk. Carlson thinks outside of the box to provide solutions to make deals happen! They are responsive, meet deadlines, and...

"Carlson Environmental has remained to be Northern Builders' trusted partner for environmental consulting and services for over twenty years. Their knowledge and expertise have helped us make the informed and confident business decisions required for the development of several million square feet and the management of our portfolio."

“Carlson, Ed Garske and their people are consistently effective, insightful and responsive. They provide invaluable service and support to our investment and management efforts.”

“I first encountered Carlson in the 1990’s on the other side of the table relating to a complex Federal facility. They were professional, responsive and importantly, really got the concept of solving the problem for the benefit of the project. Since then I have frequently retained and worked...

Ed Garske and I worked on a transaction involving the due diligence and sale of 75 industrial properties. In investigating the environmental condition of the properties and identifying issues to be resolved to allow the deal to go forward, Ed was very thorough, practical, and responsive. Everything was...

“The Carlson Environmental professional staff has the technical skills and experience necessary to provide practical solutions to environmental issues. We value their expertise along with the responsiveness and collaboration they bring to our project team.”

“Our company has used Carlson for over 20 years and I personally have worked with Ed and his team for the past two years. As a developer, we base a lot of our decisions on the environmental assessments Carlson provides us. Their communication, ability to make deadlines, and...

“For over 20 years, Carlson Environmental has exceeded our expectations of quality and performance. Carlson’s team exhibits an exceptional ability to identify, explain, and solve environmental issues in a timely and cost-effective manner.”

"Carlson Environmental is a no-frills, no-nonsense environmental consulting firm that does one thing very well, which is to get the job done. They have a talented, practical staff that works with authority and with a good client touch."

“I wish to offer my highest recommendation of both Ed Garske as well as Carlson Environmental. On countless occasions both recently and over the years they have exhibited the highest standard of customer service I have experienced in virtually any industry. They are a classic case of "under...

“Dermody Properties relies on Carlson Environmental as a critical member of its acquisition due diligence team. Ed Garske and Gail Artrip are experts at providing a pathway to a solution for brownfield redevelopment projects.”

“During a routine refinancing of our property, an environmental issue was found that we were not expecting. Ed Garske guided us through the analysis of the problem, the required remediation and the process for obtaining the governmental approval of the work, as a friend more than a vendor....

"Having worked with Carlson Environmental for almost 20 years, and on dozens of properties all I can say is “thanks”. Whether it was a straight forward acquisition, or the acquisition/development of a Superfund site, Carlson has always provided accurate guidance that helped to get the deal done. Smart,...

“The Carlson team not only brings technical expertise to land based environmental problems, but also pragmatic, business oriented solutions. Their experience and skills are often keys to allowing buyers and sellers to find and implement solutions which are key to making business and real estate transactions proceed.”